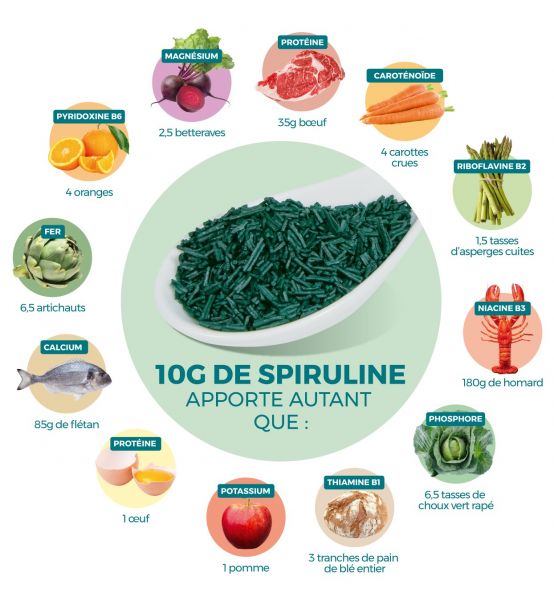 Spirulina, the Superfood of the Future

Spirulina is considered to be one of the most POWERFUL of our planet. It existed already, three billion years ago! This micro alga is the oldest form of life on earth. It contains minerals, trace elements, calcium, phosphorus, magnesium, iron, zinc, manganese, chromium, sodium, potassium and selenium. and proteins of excellent quality.

Spirulina contains a mine of nutrients in a very small volume.It contains 55% to 70% of proteins of excellent quality (proportion of amino acids and optimal digestibility).

Spirulina is an exceptional source of varied carotenoids (mainly beta-carotene, but also crypto xanthine, lutein, zeaxanthin). It provides an astronomical quantity of beta-carotene, is an excellent source of iron, contains an appreciable amount of gamma-linolenic acid, an unsaturated fatty acid of the family omega-6.

In addition, spirulina is rich in phycocyanin, the only natural blue pigment that can be used as a food colorant and is believed to have significant antioxidant activity. It also contains chlorophyll and small amounts of several minerals. It is low in calories and is given immunomodulatory properties.This is why this seaweed is considered a "super food".Spirulina is a hope in curing cancers, and shows effects in decreasing HIV progression.

Thanks to the regular intake of spirulina some seropositive people see their T cell levels increase. Spirulina is thus a precious help for people who want to have a dietary supplement for more tonus, and vitality for their everyday life (sportsmen, concentration, help to slimming ...)Cons-indications• Some sources, however, recommend caution in pregnant or lactating women due to lack of data on this subject.

• People with phenylketonuria should avoid spirulina because, like all foods containing proteins, it contains phenylalanine.

• In some people, symptoms such as gastrointestinal disturbances and headaches may occur, especially when starting dosages are too high. To avoid these symptoms related to the detoxifying properties of spirulina, start with 1 g per day, ie two capsules only for one week and gradually increase the dose by 1 g in the following weeks.

• 3 times daily - 2 capsules of spirulina after each main meal.

Ingredients of each SPIRULINA capsule:

• Each capsule contains 400 mg of Spirulina

THIS IS A PHYTOTHERAPY PRODUCT NOT PRESCRIBED BY DOCTOR

THIS PRODUCT IS LEGAL TO BE SOLD IN THE WORLD